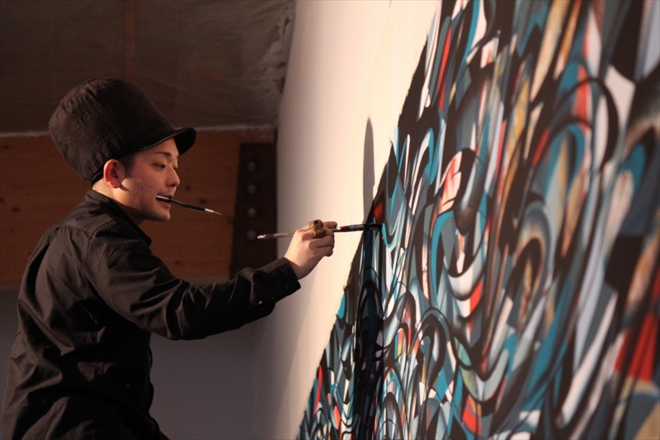 
I liked to make a thing shince childfood. I started working production in early teens.
I started Live Paint from 2001, I’ve pursued of extemporariness and the specificiry of the place including. On the other hand, I was planning and exhibitions and exhibits such as the decoration in many stores and making request production.
In recent years, my expressions have diversified such as have drawn a picture large EMA and Japanism modern picture, and while promoting dedication and cultural inheritance, producing solo exhibition and participating in overseas art festivals.

I’m continuing to search for the “something” hidden in all things by blending thoughts and senses peculiar to Japan, traditional technique with thoroughly modern imagery.
His painting brush is still driving now.

2011
Draw a picture large EMA『御柱大祭行列図』, dedicated it to the god of TAKEI shrine (Nagano).

2013
Draw a picture large EMA 『千歳宮秋季例祭神輿渡御図』, dedicated it to the god of Chitose no Miya (Nagano).

2014
Was invited to Iceland and joined international art festival.

2014
Draw a picture 『善光寺参り絵解き図』, and participate in new culture for explanation of picture.

2015
Was invited to Turkey and joined international art festival.

2017
Was invited to Mexico and performing arts and cultural exchanges through LivePaint and exhibition.

2017
Was invited to France and held a performanceand solo exhibition.